You are here: Home / News / The Extensive Use Of Gazebo, What In The World Is A Gazebo For, Anyway?

The Extensive Use Of Gazebo, What In The World Is A Gazebo For, Anyway?

Imagine yourself on a warm summer day, clutching a cold drink in your hand. Your eyes sweep across your yard, looking for a corner in which to relax, among the beauty of your flowers but away from the sun’s harsh rays. But there is little shade to be found. Furthermore, although your flower beds are beautifully cultivated, you notice that your landscape is a bit one-dimensional. It could use a large, ornamental structure, perhaps over there by your heirloom roses.

It may be time to consider buying a gazebo.

WHAT IS A GAZEBO?

A gazebo is a free-standing outdoor living space designed to ornament the landscape. The classic gazebo is octagonal, and a roof with a small cupola on top. Of course, not all gazebos follow this classic design. Some are square, oval, or rectangular. Some don’t have a cupola, and some don’t have a rail. However, most gazebos stick closely enough to the classic design that they are immediately recognizable as gazebos. 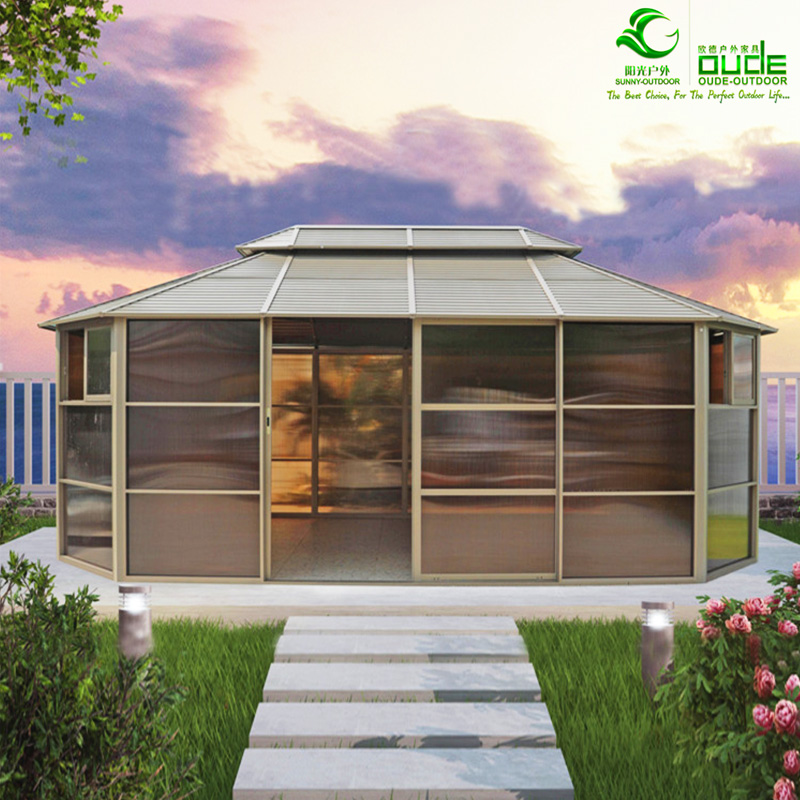 WHAT IS A GAZEBO USED FOR?

Your gazebo can serve many functions. You can hang a hammock inside a smaller gazebo and relax in the shade with a book and a cool drink. You can dash into your gazebo to avoid a sudden rainstorm. You can put a table in the center of a larger gazebo and host an outdoor dinner party or line the edges with benches and host a more casual gathering. It’s a picturesque place to propose to your girlfriend. By lining up chairs to face the gazebo, you can host a backyard wedding, or ask a local band to set up inside and play a concert. Take a look at our gazebos. 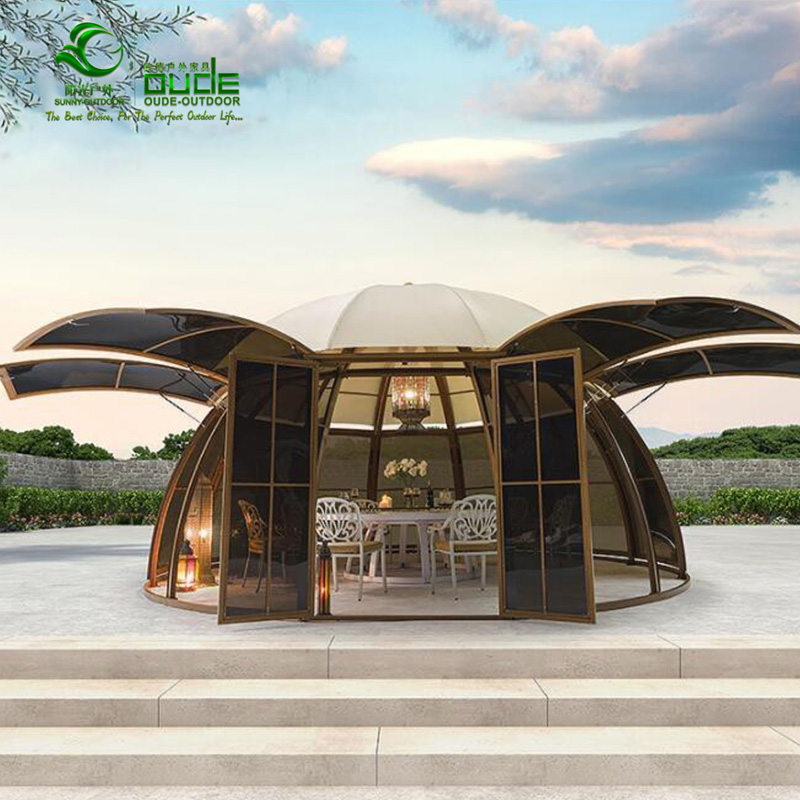 WHERE DID THE GAZEBO ORIGINATE? 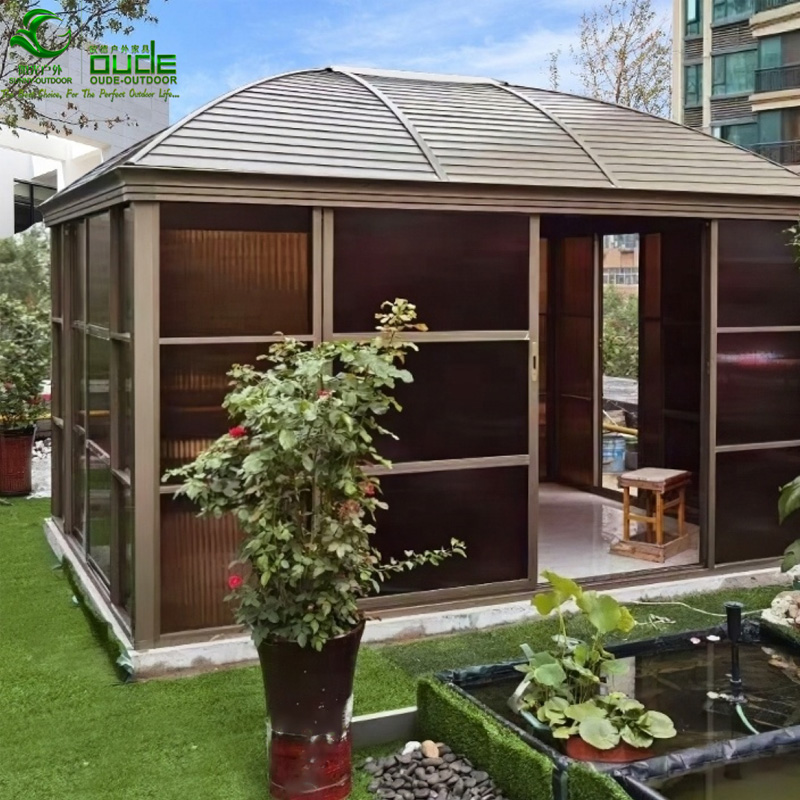 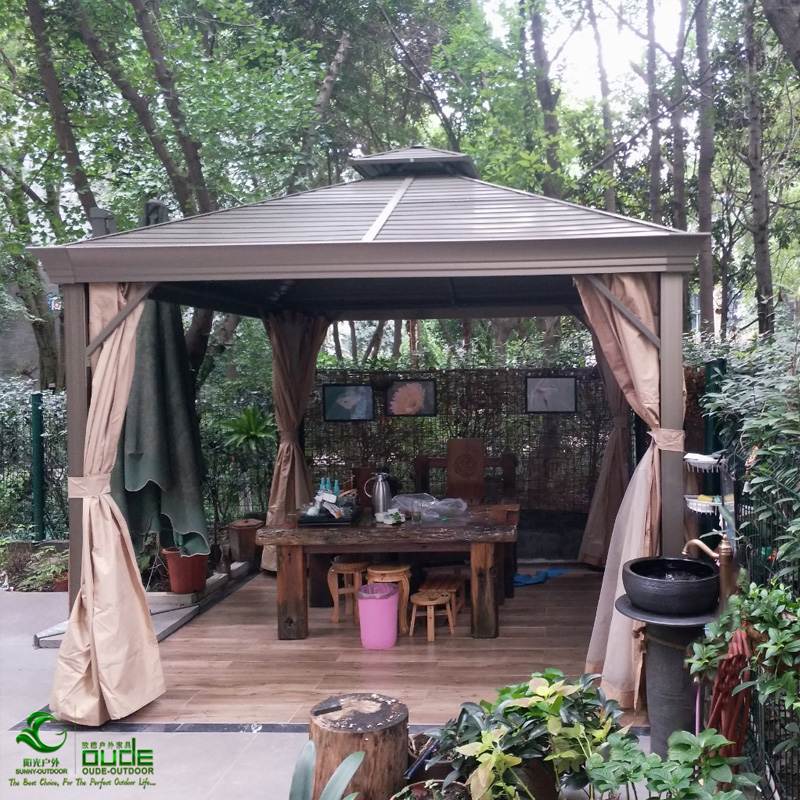 As trade between the East and the West increased, Europeans increasingly became fascinated by all things Chinese. They began borrowing things from Chinese culture. This included gazebos, called temples or pavilions at the time, as well as things like China dishes, tea, and even fairy tales.

European gazebos also originated from Chinese culture. The European gazebo trend seems to have started in the 14’th century, when France built four gazebos at the Louvre. Throughout the next 400 years, as Europeans grew increasingly fascinated by the Chineses, European gazebos became more and more popular.

WHY IS IT CALLED A GAZEBO?

Even though gazebos have been popular in Europe since the 14th century, they were not called “gazebos” at the time. As far as modern scholars can tell, the first instance of the word “gazebo” appearing in print was in 1752, in William Halfpenny’s book “New Designs for Chinese Temples.”

No one is sure why a gazebo is called a gazebo. Since the European gazebos came from east Asia, and since Halfpenny’s book was about Chinese-inspired architecture, some have thought that the word comes from an East Asian language. Others have concluded that Halfpenny made up the word by taking the verb “gaze” and adding a suffix to make it sound like a Latin word, making “gazebo” mean “I will gaze,” just as the Latin word “lavabo” means “I will wash.” 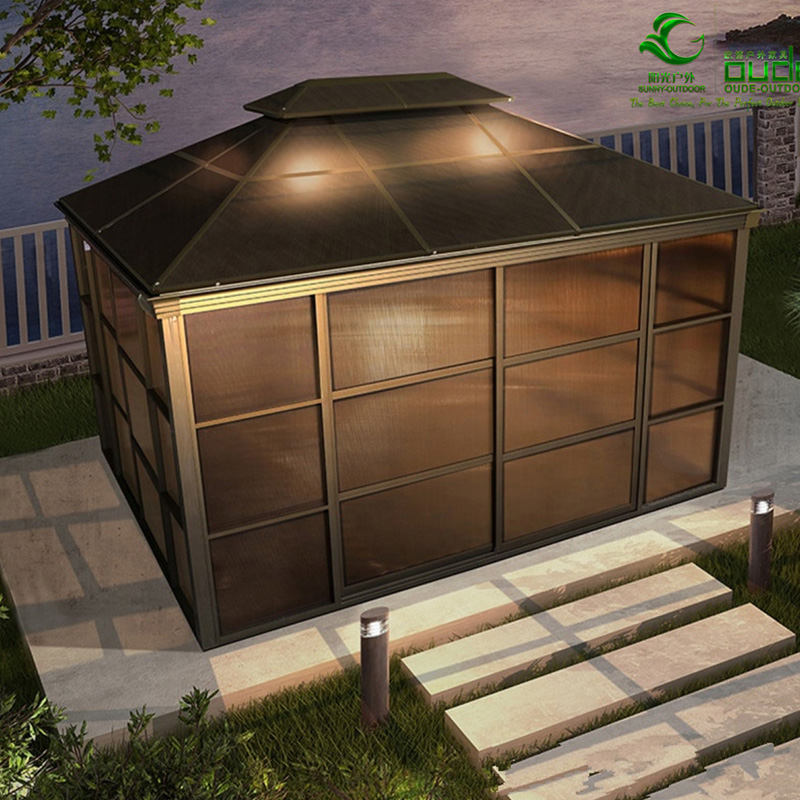 WHAT IS THE DIFFERENCE BETWEEN A GAZEBO and A PERGOLA?

Gazebos and pergolas are all small outdoor living structures. What are the differences between the both? 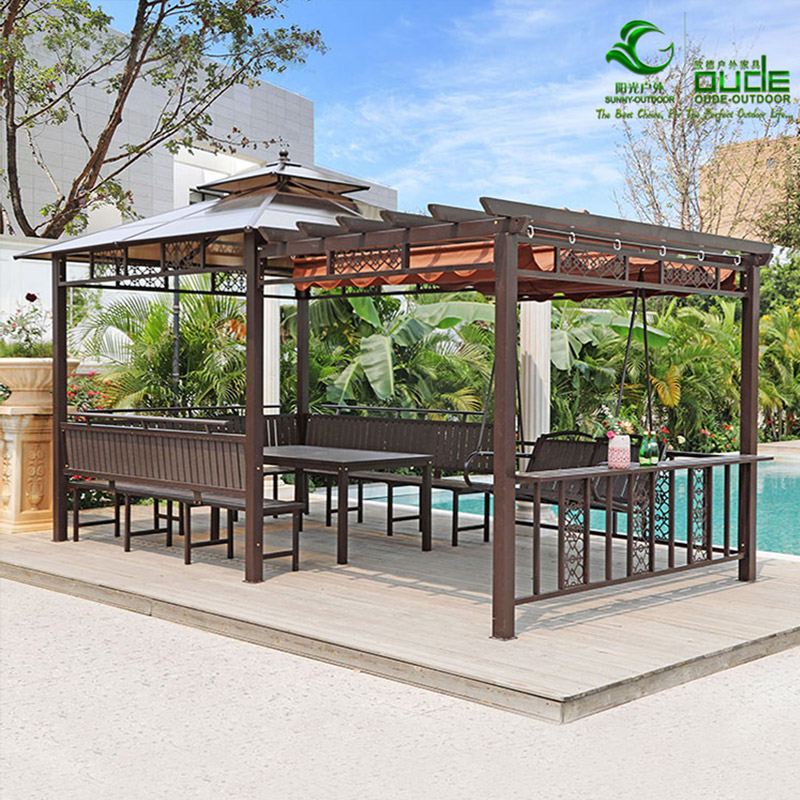 A pergola has a lattice roof, and thus doesn’t provide as much shade as the gazebo, which has a full roof. Still, climbing plants can be trained to grow on the lattice, offering a bit more shade. A pergola is usually square or rectangular, while a gazebo is usually octagonal. Finally, a pergola is sometimes attached to another building, such as a home, while a gazebo is a free-standing structure. 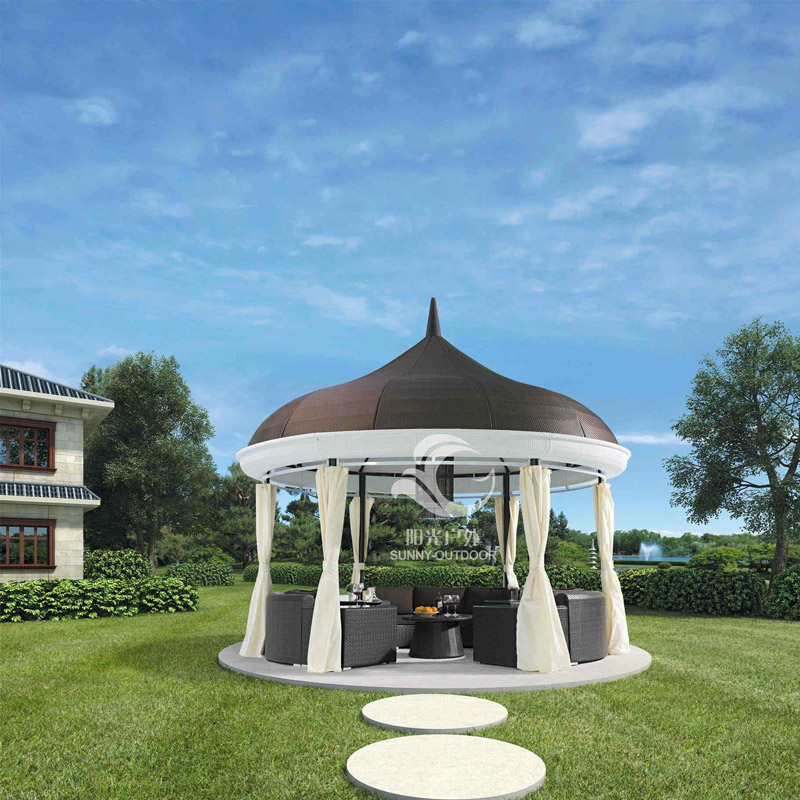 WHAT SORT OF GAZEBO SHOULD I BUY?

When gazebo shopping, the first thing you should think about is shape. Do you like the look of the traditional garden gazebo, or would you rather go for something a little different? Perhaps an oval or a rectangle would be more your style. 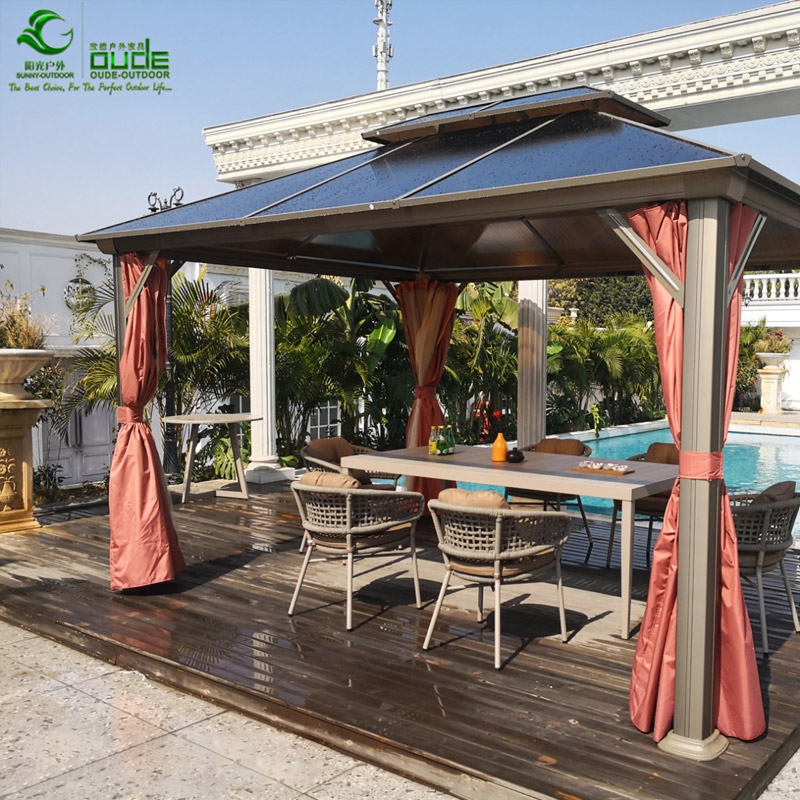 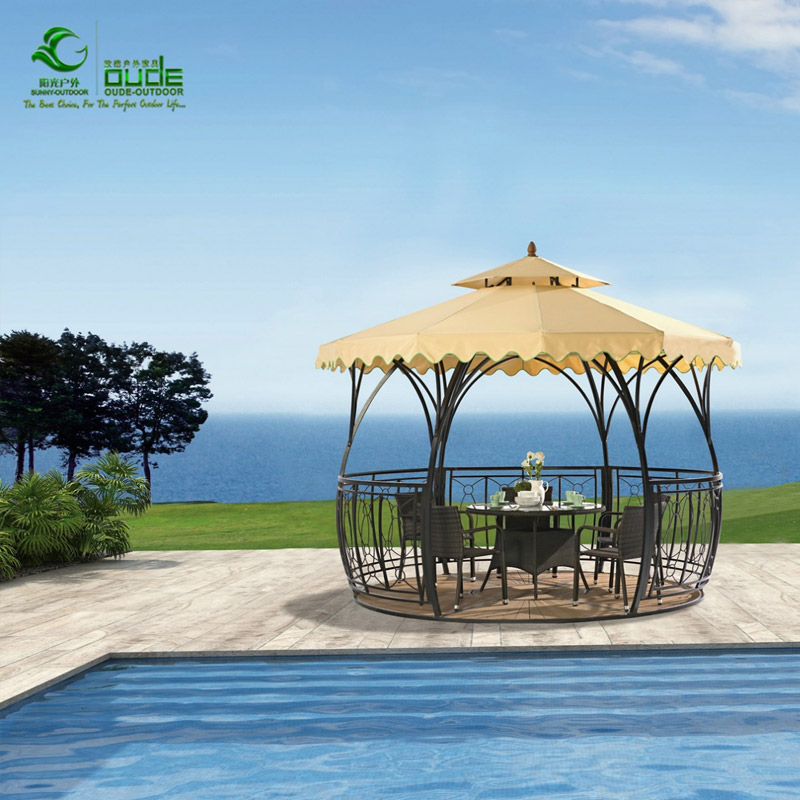 Second, think about how large of a gazebo you would like to have. Do you envision placing a porch swing in your gazebo and sitting there with a close friend, or do you picture hosting a small dinner party inside? Will a larger gazebo overwhelm your small yard? Will a tiny gazebo get lost in the landscape? 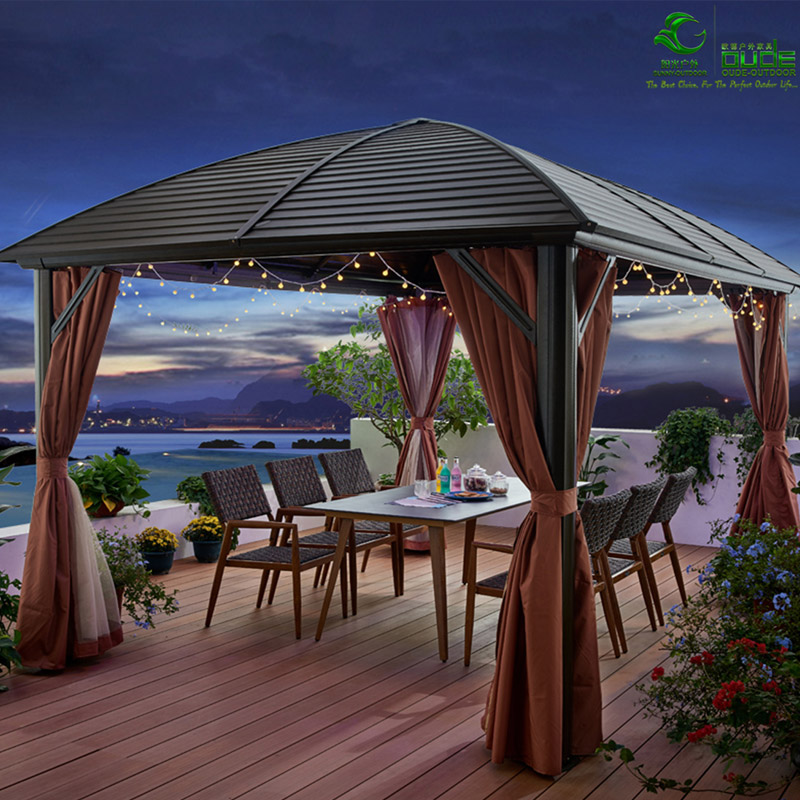 Finally, consider if you would like a special gazebo, which sometimes the cost is also advantageous. 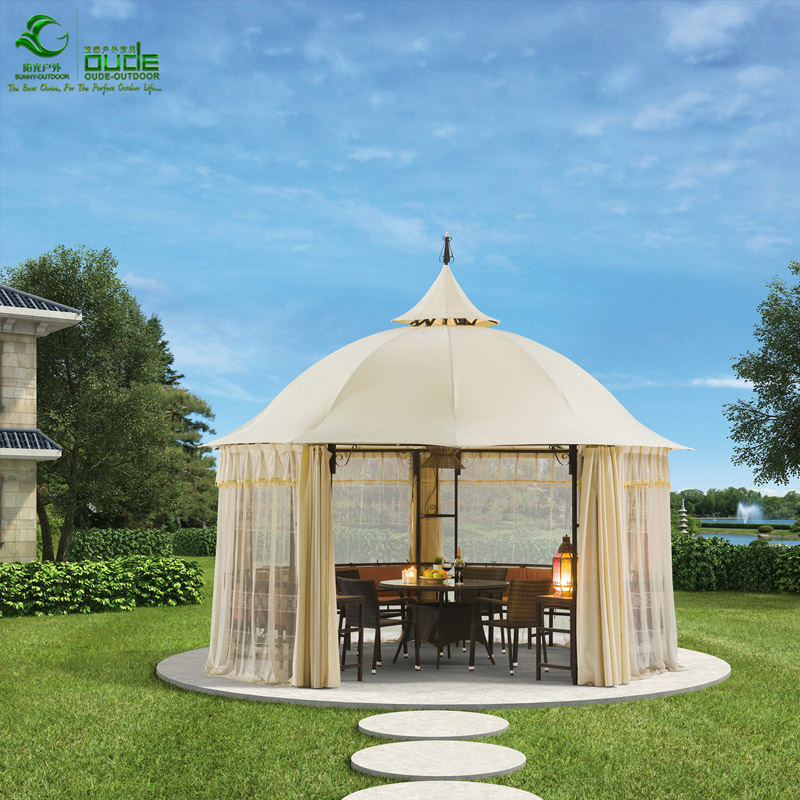 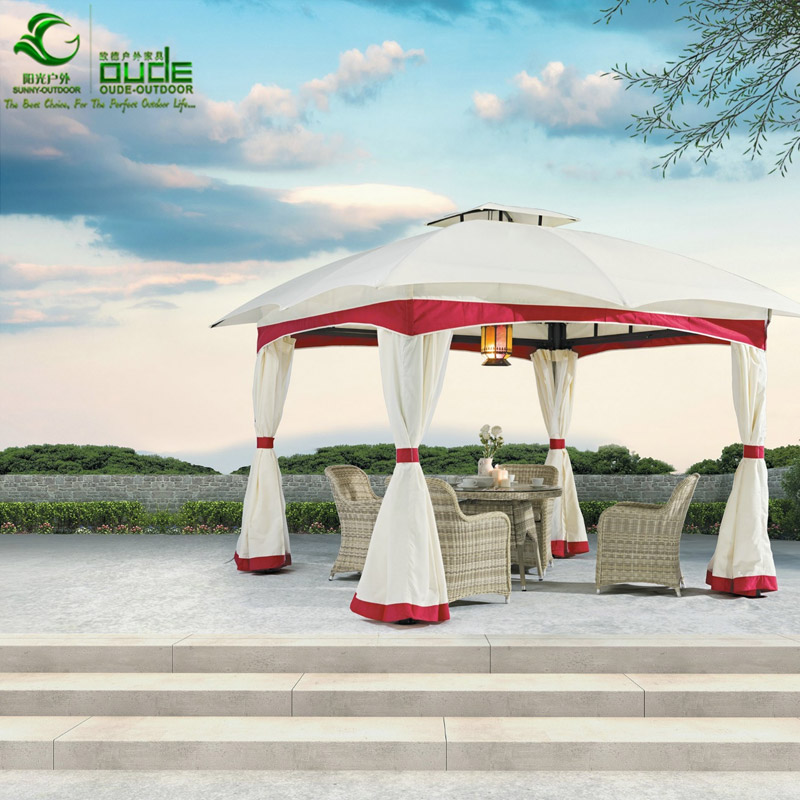 HOW MUCH DOES A GAZEBO COST?

Like any other structure, the cost of a gazebo varies wildly based on the sizes and options you choose, and the availability of builders in your area. There are many inexpensive gazebos on the market made from cheap parts, but then you get… a disposable gazebo.

For real beauty and longevity, you’ll want to work directly with a builder or reseller of permanent gazebos. Some are willing to give a free and detailed estimate of the project before you get started.

WHERE SHOULD I PLACE MY GAZEBO?

You’ve found a beautiful gazebo that’s just the right size, and within your price range. You’re so close to having that haven of rest in your backyard. Only one problem remains. Where should your new gazebo be placed?

Remember, a gazebo is designed to be a place where you can “gaze” upon the landscape. What are the most beautiful places in your yard? Do you have a pond or stream? Consider placing your gazebo next to it. 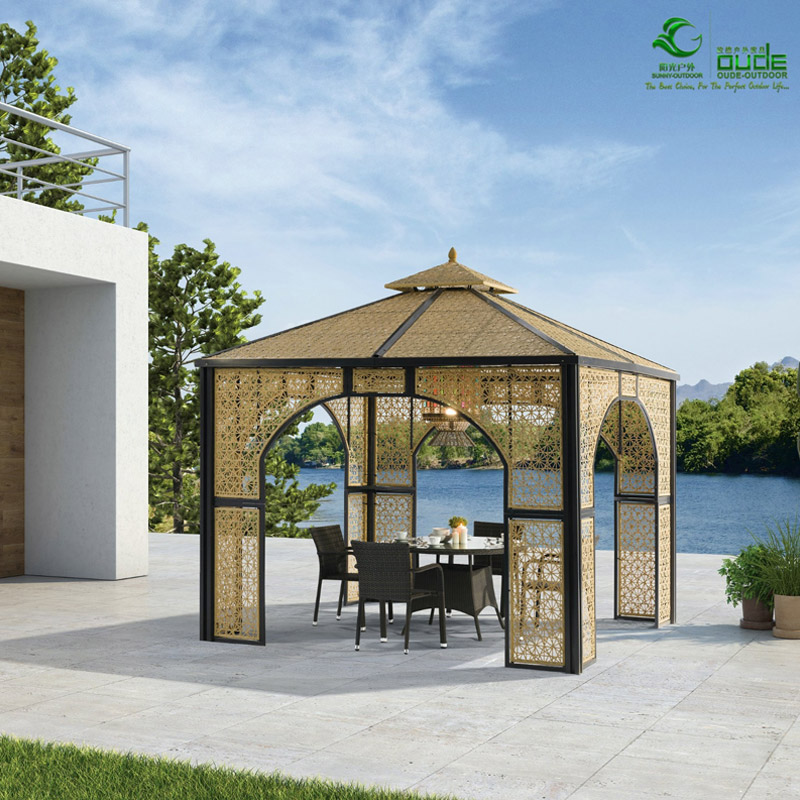 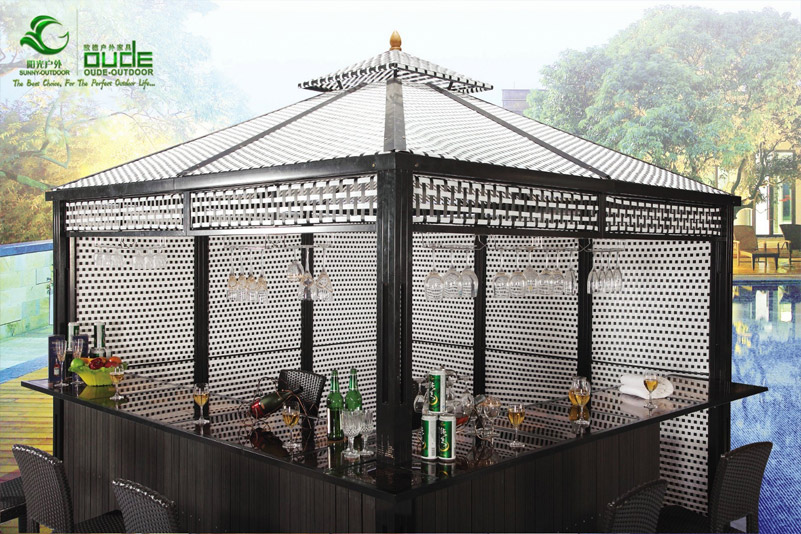 If you have a larger gazebo that you’d like to make the focal point of events, make sure you have ample yard space on at least one side of your gazebo. That way you can set up extra seating on the lawn. And if you’re hosting a band or a wedding, you want to have plenty of space for guest seating. 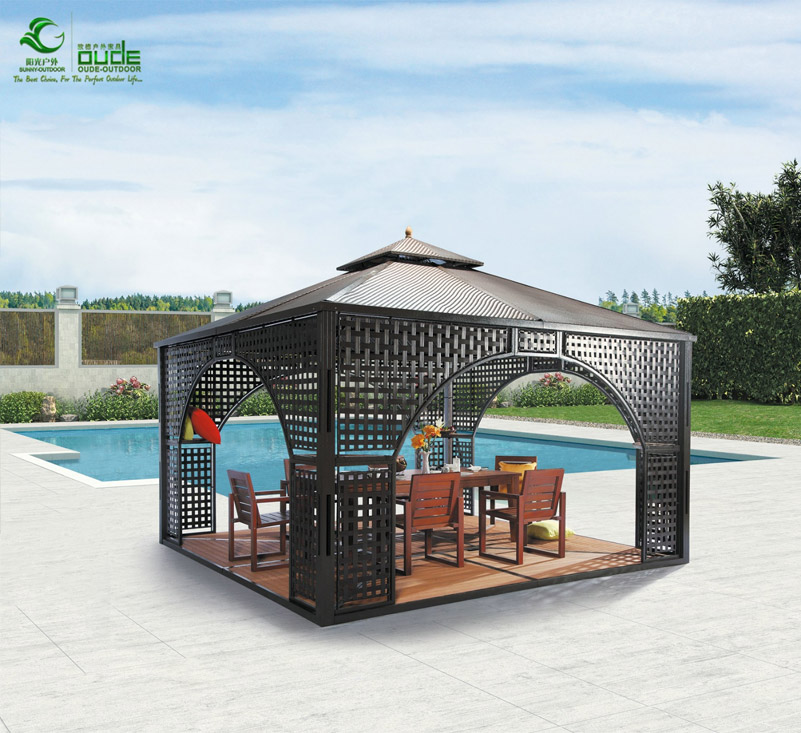 Finally, don’t shove your gazebo into a corner. It should decorate the yard, and when you sit inside you should be able to gaze in all directions. But be prudent, and don’t overcrowd your yard. You want to be able to easily maneuver around it with a lawnmower and other garden equipment. 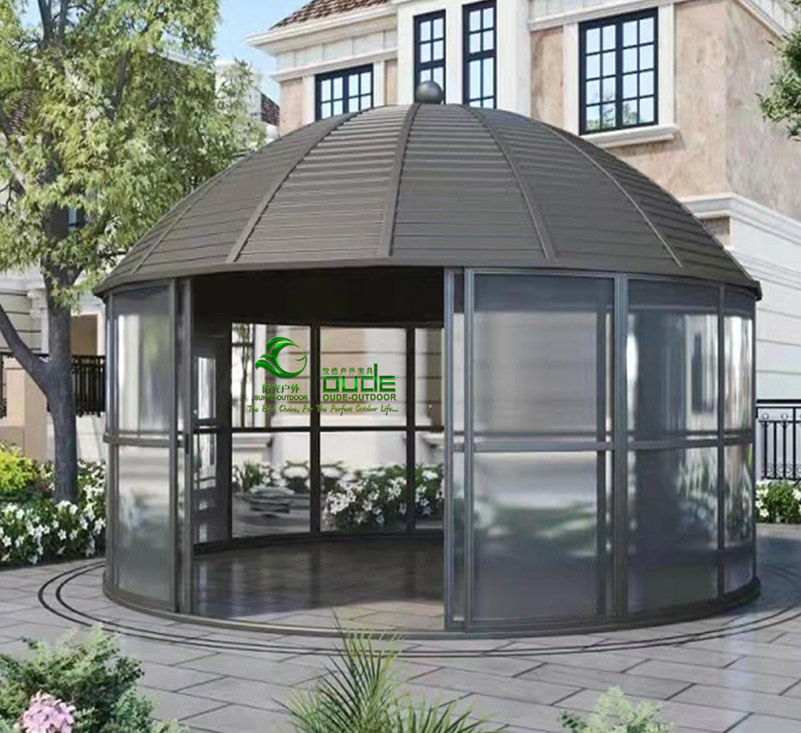 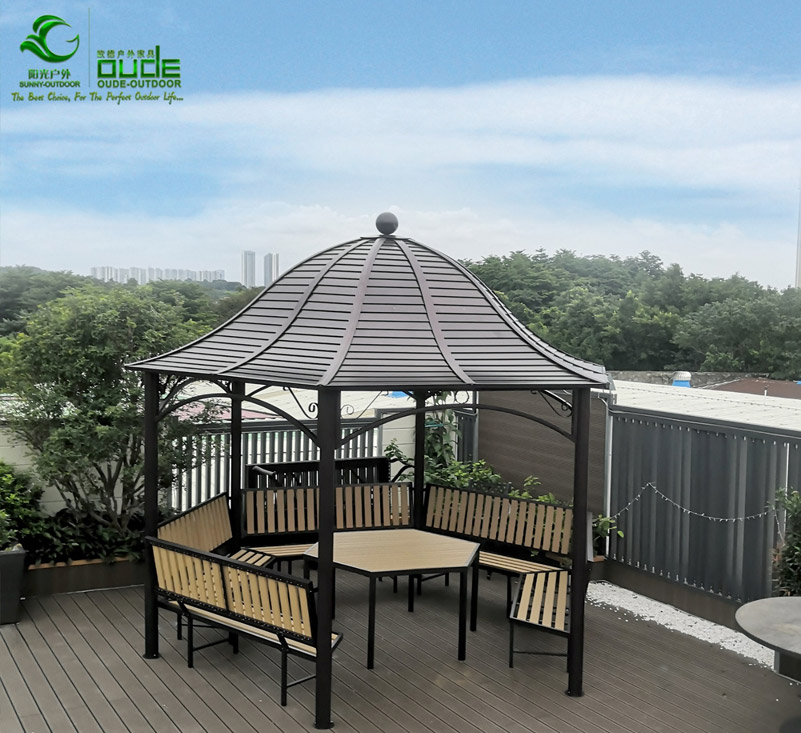 That’s it! Once you’ve decided on a location for your new gazebo, you can get it delivered and assembled in your yard.

Now, on warm days you can grab a book and a cool drink and head out the back door. As your eyes gaze on the landscape, they rest on the gazebo, nestled amongst your favorite flowers. Today will be a day to relax and read in the shade of your beautiful new gazebo.

GuangZhou Sunny (OUDE) Outdoor Furniture Co., ltd. is a professional manufacturer in outdoor furniture with 18 years-experience.
Contact Us
We have an excellent technical team.
Follow Us
Featured Products 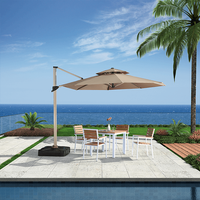 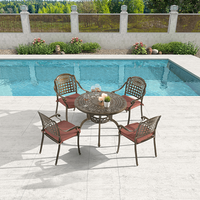 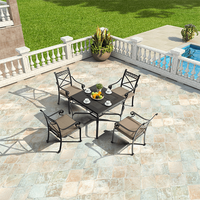 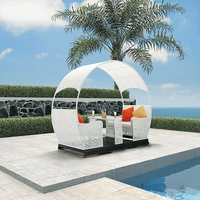